That Most Wonderful Time of the Year 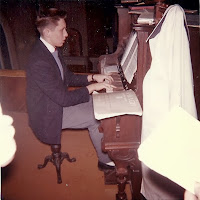 Do you remember those years when it seemed that December lasted forever? A day felt like a week then as you minded your Ps and Qs... just in case. Finally it would be Christmas Eve, and you were getting ready, at least in our house, for Midnight Mass. There would be people over after supper, also waiting to go to Mass. The stereo would be playing Christmas music, and you would be trying to find something to do to make the time pass just a bit more quickly. With two channels on the television, long before the birth of videos, your options were pretty limited.


Midnight Mass – there was another thing that had me in knots, but not for the reasons you would think. For starters, we had a small farm and on that farm, we had some donkeys. I had been told (probably by one of my slightly evil older sisters) that all donkeys knelt down right at midnight on Christmas Eve. Every year I asked if I could stay home to watch, just in case it was true. Every year, Mom replied by handing me the clothes I would be wearing for Midnight Mass. 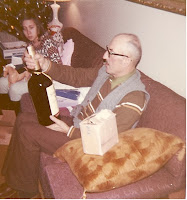 The radio at night in those days left much to be desired, especially in the old Biscayne, so we sang as we drove to church and back. Being the youngest of the brood, I was always in the middle of the back seat, but since seat belts were for all intents and purposes non-existing, I sat on the ‘hump’ right in the middle of the car, hanging onto the back of the front seat, so I had the music all around me. I like to think I invented sound-surround that way. We always had to be at church early, because it was always full, and I remember thinking with every tick of the second hand on my watch that we were delaying Santa. It’s rather hard, as a child, to grasp that Santa/Baby Jesus relationship and keep it all in perspective.
After Mass, we would come home, the kettle would go on, and my dad would make the hot toddies. It made me insane. We needed to all get to bed, time was fleeting and it would be morning soon, and Santa wouldn’t come if everyone was still up drinking and visiting. My first real recollection of this was our first year in Alberta. My brother had come to visit; it was the first time I had seen him since we have moved from Winnipeg. Along with the hot toddies an the full house, I remember very well that I desperately wanted to keep him there with us. It was also my first Christmas with all my uncles and aunts, and the ‘bachelor uncles’ who became a Christmas fixture for us. It wasn't Christmas until they had arrived. 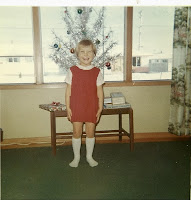 Things have changed a lot since then. For starters, December always goes by too quickly. It’s amazing how the years change our perspective of time. Everything happens too quickly now. Thankfully artificial Christmas trees have changed from what they were. We had the ones that consisted of a stick with holes in it that more sticks were jammed into. There would be about 20 branches (sticks) on which to hang ornaments and tinsel. If you were really lucky, you had one of the hideously colored ones. Maybe next year, we will host an ugly tree contest, so start looking through those old pictures now (there are some added bonuses to looking at those pictures, but I won't ruin the surprise for you.)
For some reason, back then Mom was up at 5am, getting the turkey ready. What was it about turkeys then that required so many more hours in the oven? Mine is done in four hours; Mom’s would be in the oven for ten... but it was always cooked perfectly, even without the Electrolux 'Perfect Turkey' oven setting that does everything but stuff the bird. 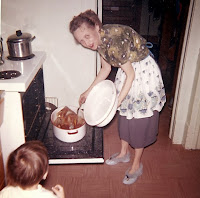 We all strive for what I call ‘the Rockwell Christmas’ – that idyllic event with carolers and nog, roasting chestnuts, warm camaraderie, love oozing from every corner as we all decorate the tree and read The Night Before Christmas together. The funny thing is that I am not sure if we had that, if it’s even possible to have that, we would remember it. I remember the Christmas the power went out and we cooked the turkey on the barbeque, and sat around playing card games. I remember the Christmas the grub was sick, and how I put him into the bed just made with new Santa-delivered satin sheets, only to have him skate right off the other side. I remember the Christmas where a dozen friends had to stay over because of the blizzard that moved in and turned they vehicles into snow-covered rocks in the driveway (thanks, Dad, for the hot toddy tradition because we needed it that night while we huddled around the table with blankets stacked on the floor to help keep us warm.  I remember when we had K’Nex scattered over every inch of the floor as we tried to figure out what piece when where according to their weird picture they sent with it. I remember being in the kitchen doing the dishes after the Christmas dinner, listening to everyone telling their ‘remember that Christmas when’ stories, and laughing until I cried.  Maybe that’s what Christmas, or Hanukkah, or every other holiday,  is supposed to be about. Yes, some things have changed, but that which is important stays with us, in our hearts and in our memories, as we create our new traditions with our own families. 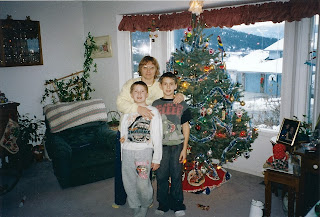 At this time of year, we all become children at heart, so from this very unlikely child, and her garishly overdone Christmassy home, I wish you the very best of the season, a safe holiday, and all the happiness and peace you can stand in 2014.

Merry Christmas!
Posted by The Great Hair Migration at 7:40 AM No comments: